Port Arthur is often characterized as being open for business.

These days, business is just booming in the city. And it’s asking for locals to help fill jobs.

Port Arthur received major industry news Tuesday with the announcement of a $130 million multi-modal logistics terminal owned by US Development Group (USDG) under construction at 7350 Gulfway Drive. The Port Arthur terminal is expected to bring more than 1,200 direct and indirect construction jobs to the city and Jefferson County, as well as more than 40 full-time jobs once commercial operations begin.

Houston-based USDG says the terminal is scheduled for completion by the second quarter of 2021.

“The first thing was, they were reaching out to get the project down here,” Batiste said. “We sent letters of support. The Port of Port Arthur was upfront in sending letters to the USDG about 1½ years ago. Larry Kelley and I worked very closely to work with folks to get it to Port Arthur.”

USDG acknowledged Jefferson County Judge Jeff Branick and the commissioners, Mayor Thurman Bartie and the city council, and City Manager Ron Burton and staff, along with the “supportive business environment” in helping the company decide to locate the project in Port Arthur.

The news of a new USDG terminal came a week after Denver-based Alpenglow Rail and USA Rail Terminals announced a rail-car storage, switching and transloading logistics park at 4801 53rd St. in Port Arthur.

During the first week of December, public hearings were taken for the licensing process to a proposed deepwater port linked to a Nederland tank terminal.

The Blue Marlin Offshore Port project, which would connect the terminal to a Cameron Parish station via 37-mile crude oil pipeline and then the station to the port, is pending a final decision from Texas and Louisiana governors by August 2021 and, if approved, issuance or denial of the license by the Maritime Administration by September 2021.

Meanwhile, other oil and gas industries in Port Arthur are undergoing expansions.

“It’s great for Port Arthur,” said Kelley, asked about the rapid increase of business developments in the city. “We want to see all businesses succeed.”

The Port Arthur terminal, which USDG CEO and President Dan Borgen called the first of its kind, is being built to handle DRUbit, a blend of non-hazardous and non-flammable Canadian heavy crude oil for rail transportation. The facility, according to USDG, will allow heavy crude extracted from northwestern Canadian tar sands to replace competing feed stock from other imported sources it says “are either becoming prohibitively expensive or politically arduous.”

“Working with our customers and participating railroads, we looked at locations on the U.S. gulf to site our first DRU-bit™ destination facility,” said Bill Frerking, chief administrative officer for USDG. “Port Arthur was chosen because it satisfies many of the priorities for the parties involved. Comprehensive rail and multi-modal infrastructure, and connectivity to refiners and potential customers were important factors. We are extremely pleased to add this location to our existing portfolio of port terminals and look forward to becoming a valued part of the greater Port Arthur community for years to come.”

Among its project features, the facility will connect pipelines to the Phillips 66 Beaumont Terminal to give customers access to a large network of refining and marine facilities.

“Those guys earned it,” Kelley said of USDG. “There have been several different potential developments in the area. The area has a lot going for it. They’ve gone about it the right way. They pursued it methodically and professionally.” 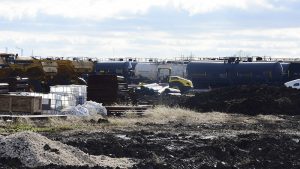 Construction was underway at USA Rail’s Port Arthur terminal at the time of acquisition, according to a news release from Alpenglow. The city of Port Arthur had just abandoned a 1.845-acre portion of 53rd Street north of Texas 73 between Twin City Highway and the Kansas City Southern railway to USA Rail.

“USA Rail and the High Roller team had a lot of vision and built a great business,” Alpenglow CEO Rich Montgomery said in a release.

The High Roller Group previously owned USA Rail along with Jim Donnan Companies, both based in the East Texas town of Center.

“The facilities are state-of-the-art and built to last,” Montgomery continued. “The USA Rail assets are strategically located in excellent industrial markets and are well-positioned for both defensibility and growth. With our relationships, marketing capabilities and commitment to safety and customer service, we’re thrilled to work alongside the USA Rail team to continue to grow these companies, and to explore future opportunities with the High Roller team.”

Montgomery told Progressive Railroading magazine the terminal is rolling into its second phase of construction.

Steve Roth, executive vice president of USA Rail, said the facility is storing approximately 500 rail cars but is being expanded to a capacity of 1,200. The terminal is focused on rail car storage and not handling of fuels, he said.

“We’re excited to be in the city of Port Arthur,” Roth said. “It’s been an excellent relationship with the city and county. We hope to be great corporate partners with the community.”

Contributions by PAIG and Energy Transfer

Although it’s awaiting a license, Energy Transfer, a Dallas-based company behind the Blue Marlin project, has already given back to Mid- and South County on two occasions.

Energy Transfer donated $75,000 to Golden Triangle Empowerment Center, a nonprofit that provides job training and placement services for overlooked and underserved communities in the area. The gift, according to a news release, helps GTEC transition its curriculum into a virtual learning environment.

Energy Transfer also gave $10,000 to the city of Nederland toward the purchase of a new fire truck to replace a vehicle from 1987.

The arrival of USDG’s and USA Rail’s terminals — along with the potential of a deepwater port and ongoing construction at Port Arthur LNG — provides a “certain level of optimism” to Port Arthur, Kelley said.

“We are so blessed to have these announcements,” he said. “You think about the billions of dollars in LNG expansion. We’re very fortunate. We don’t want to take it for granted. It provides livable working jobs. I think it’s great news for our area.”

The benefit of having such industry, Batiste said, is a multitude of jobs offer salaries in the $40,000 and $50,000 ranges that could change the life of a person.

“I think it’s a good thing for Port Arthur because we’re a petrochemical town,” Batiste said. “It’s not going to change. The skill sets that will be required to do a lot of the jobs in that rail yard is a skill set we could get folks in training to do. I think they have committed to looking at our local people, putting them to work in the rail yard, and I think it’s going to be a big benefit for the people in Port Arthur who want to engage in learning the skill sets to be employed.”

Batiste said the Port Arthur EDC is working on landing another business in town but declined to name it.

Along with helping industry grow in the city, Batiste is focused on helping Port Arthur citizens who want to acquire skills needed for the upcoming jobs.

“Our goal is to improve the quality of life by putting money in people’s pockets,” Batiste said. “If we put money in people’s pockets, their lives will change, and the city will grow. Our biggest deficiency is people have to be willing to acquire the necessary skills. If we can get 20 percent or 30 percent of people in Port Arthur that want to learn those skills, it’s nowhere you have to go. All you have to do is get out here and learn the skills.”

The vast resources of an international port city on the Texas coast are leading to a vast landscape of opportunity.

“We’ve got available and developed land and we have access to deep draft water, and you combine with rail access and a trainable workforce,” Kelley said. “When you put all ingredients and bake that cake, it turns into something great.”